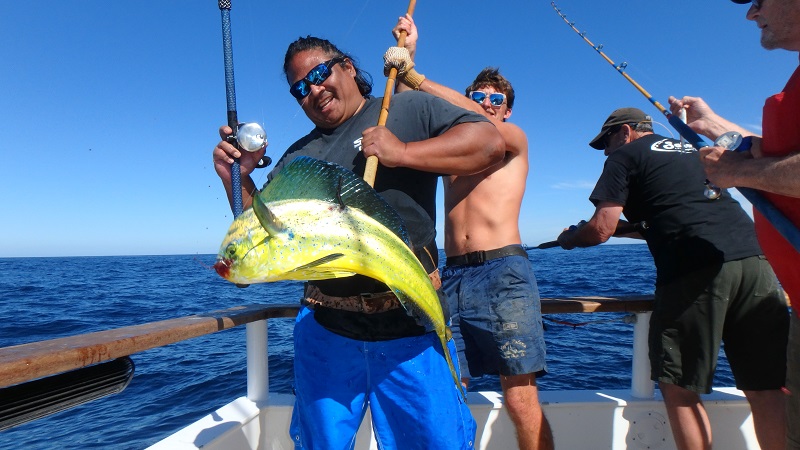 Hello everyone; We started out yesterday, with good Yellowfin tuna action that went throughout the day. Once we had our daily limits, it was time to go looking for COW’s. We departed the area and to the lower banks.

We arrived in the early morning hours, and it didn’t take long for the first fish to hit a chunk. Then another one was on, oh boy. After a length battle, Brian Yoshida would land his personnel best Yellowfin tuna. A nice 220 pound giant. Yes it was his personnel best, and yes he received the RP shower.

But the other fish was another story. It was David Marciano, and David would fight this giant for almost two hours, before it would chew through the 130 pound test fluorocarbon.

We would hook two more fish through the day, but the Kenji Kanase would hook a chunk fish and do battle for almost an hour, before the crew would put three gaffs into the giant. Once on board, the fish weighed out at 278 pounds, and it was time for another RP shower.

As the sun was setting, Todd Burkdoll would hook the final fish of the day, and would battle into the night, as his fish hit the deck, and was a nice 202 butterball giant. Weather continues to be excellent, with flat seas, sunny and warm.?

After dinner, we made a tank of bait, and hopefully the bite will get better. We also caught a few 30 to 40 pound fish throughout the day. So until tomorrow, wish us luck??. Team R/p.

View all posts by Dharyl Shelbourne →